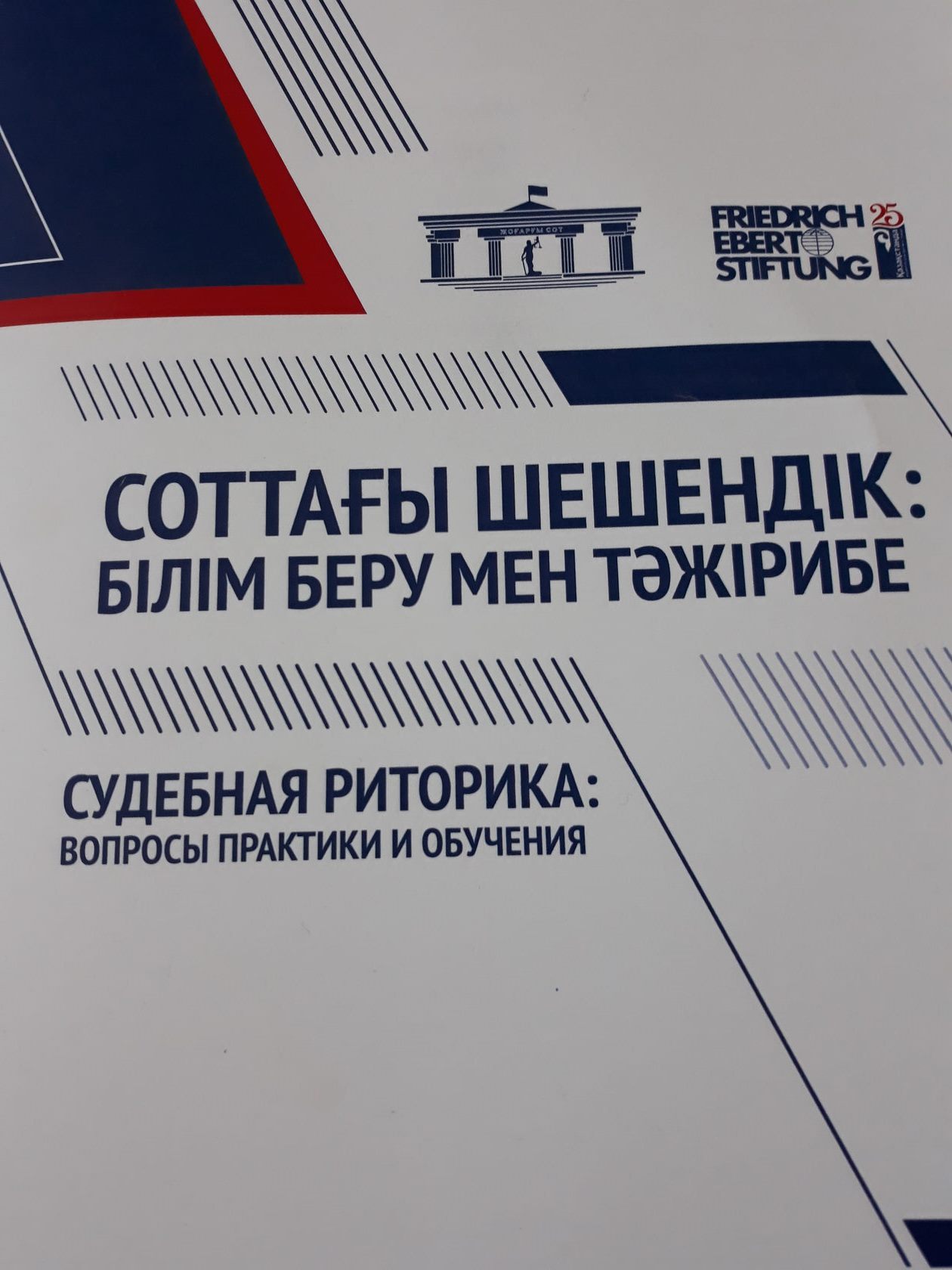 On May 31, 2018 in the framework of the International Conference "Judicial rhetoric: issues of practice and training", organized by the Supreme Court of the Republic of Kazakhstan and the Representative Office of the Friedrich Ebert Foundation in Kazakhstan, Botagoz Rakisheva, Ph.D., presented some results of the sociological study "Legal Education in the Republic of Kazakhstan", commissioned by the F. Ebert Foundation with the support of the Academy of Law Enforcement Agencies under the General Prosecutor's Office.

Prof. Christian W Haerpfer is a professor of political science and political sociology at the Institute of Political Science, Faculty of Social Sciences, University of Vienna (Austria). In 2017-2018 Christian W Haerpfer is also a Visiting Professor of Sociology at the Faculty of Humanities and Social Sciences at the University of the United Arab Emirates in Al Ain (UAE). As the "Representative for Liaison with Science Committees," Professor Haerpfer has been a member of the Executive Committee of the International Political Science Association (IPSA) in Montreal, Canada, since 2016. He coordinates the activities of all 50 IPSA research committees in terms of global research in political science and political sociology. Professor Haerpfer is the founder of the IPSA Research Committee No. 17, Comparative Public Opinion, since 2009. Professor Haerpfer is the director of the Institute for Comparative Social Research at ICSR, and the founder of the Eurasian Barometer in Vienna, Austria. The Eurasian Barometer, which analyzes social, economic and cultural changes in Eastern Europe (Russia, Ukraine, Belarus, Moldova), the Caucasus (Georgia, Armenia, Azerbaijan) and Central Asia (Kazakhstan and Kyrgyzstan) from 2000 to 2018.

Dr. Kseniya Kizilova has been Head of the Secretariat of the World Values Survey Association (Stockholm, Sweden) since 2013. As the Head of the WVSA Secretariat, Dr. Kizilova coordinates national polls in 80 countries of the world as part of the 7th wave "World Values" (2017-2019), and is also responsible for administration, communication, etc. activities of the WVSA association. Since 2015, Kseniya Kizilova has been Deputy Director of the Institute for Comparative Social Research in Vienna, Austria. In 2013, Kseniya Kizilova became deputy director of the international comparative research program "Eurasian Barometer", which analyzes social, economic and political changes in Russia, Ukraine, Belarus, Moldova, Georgia, Armenia, Azerbaijan, Kazakhstan and Kyrgyzstan. As deputy director of the Eurasian Barometer, Kseniya Kizilova is a member of the Steering Committee of the Global Barometer Research Group (GBS), which runs a network of regional barometers that study socio-political processes in all regions of the world.

On May 10, 2018 - Botagoz Rakisheva took part in the Eighth International Seminar "Current Status and Future Direction of Social Policy in South Korea and Eurasia", organized by the Korea Institute for Social Policy and the Department of Central Asian Studies, Hankuk University in Seoul (South Korea). Botagoz Rakisheva made a presentation on the subject of «The policy of the Republic of Kazakhstan in the field of ethnic repatriation (issues of adaptation and integration of repatriates in a polyethnic Kazakhstani society»).

On April 27, 2018 – Ainur Mazhitova, Director of the Public Opinion Research Institute, made a presentation "Generation Y of Central Asia: Education as a Priority for Life" at the Republican Scientific and Practical Conference on Relevant Youth Issues with the participation of foreign experts "Professions of the Future: What to Prepare for Generations Y, Z?", organized by "Youth" SRC.

On April 25-26, 2018 – Botagoz Rakisheva, co-director of the Public Opinion Research Institute, took part in the EU-Central Asia Relations Regional Conference organized by the European Union, which was attended by researchers, representatives of research and analytical structures, civil society.

On April 18-19, 2018, Botagoz Rakisheva took part in the VIII Grushinsky sociological conference organized by the VCIOM and the Foundation for Assistance to Public Opinion Studies (Moscow, Russian Federation). At the special partnership section "Northern Eurasia as a Social Space: The Sociological Dimension of Diversity and Integration", organized by the "Eurasian Monitor" International Research Agency with the participation of the Institute for Social and Political Studies of the Russian Academy of Sciences, Botagoz Rakisheva, co-director of the Public Opinion Research Institute presented the results of a comparative sociological study commissioned by the F. Ebert Foundation "Central Asian Youth": some results of a comparative sociological survey conducted in Kazakhstan, Kyrgyzstan, Tajikistan and Uzbekistan". 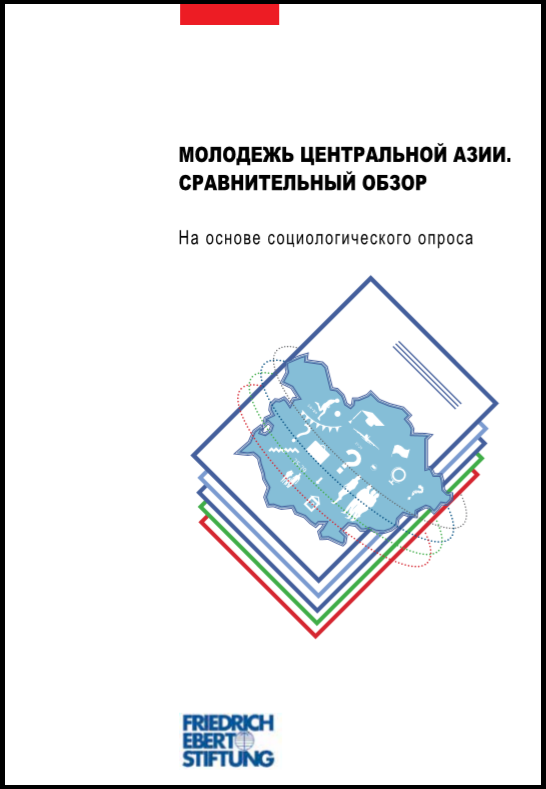 On March 6, 2018 the book "Youth of Central Asia. Comparative review" was published. Under the scientific supervision of prof. Klaus Hurrelmann and Peer Teschendorf (Germany, Berlin). Review Author: Botagoz Rakisheva. This publication was prepared based on the results of the inter-country sociological study "Youth of Central Asia", commissioned by the Representative Office of the Friedrich Ebert Fundation in Kazakhstan prepared by the Public Opinion Research Institute (Astana, Kazakhstan). Sociological research in Kazakhstan, Kyrgyzstan, Tajikistan and Uzbekistan was conducted in 2014-2015. Youth surveys were conducted according to a unified methodology, 1000 respondents from 14 to 29 years old, focus groups and in-depth interviews were conducted as well. Sociological research was based on the methodology of the German research project Shell Youth Study, conducted in Germany since 1953. Scientific consultants of the project: Professor Klaus Hurrelmann, one of the founders of Shell Youth Study and Peer Teschendorf, head of the Representative Office of the F. Ebert Foundation (2012-2016).

According to the results of a sociological study, four books were published, for each country, prepared by national experts.

This comparative publication presents the main results of a sociological study conducted in Kazakhstan, Kyrgyzstan, Tajikistan and Uzbekistan.

An electronic version of the book can be found on the websites of the F. Ebert Foundation (http://www.fes-centralasia.org/ru/publikacij.html) and Public Opinion Research Institute (http://www.opinions.kz/?page_id=3096).

On March 4, 2018, a theoretical seminar was held in Almaty and Astana as part of the preparation of the project methodology for the study of the value system of the F. Ebert Foundation. Members of the Working Group gathered to discuss the main theories and concepts for the study of values at the offices of the F. Ebert Foundation in Almaty and the Public Opinion Research Institute in Astana.

On February 27, 2018, the Minister of Religious Affairs and Civil Society of the Republic of Kazakhstan, Nurlan Yermekbayev, met with the expert community. The event was attended by representatives of the Ministry of Religious Affairs and Civil Society, the head of the Sacral Kazakhstan Research Center Berik Abdigaligli, director of the Institute of State History of the Ministry of Education and Science of the Republic of Kazakhstan Burkitbay Ayagan, director of the Public Opinion Research Institute Botagoz Rakisheva, director of the Scientific and Educational Foundation Publishing House Aspandau Radik Temirgaliev, Director of "Youth" SRC, Talgat Kaliev. During the meeting, participants discussed issues related to the value system of modern Kazakhstani youth. According to the minister, the formation of values is not a static, but a complex mechanism that needs constant adaptation to the rapidly changing reality.