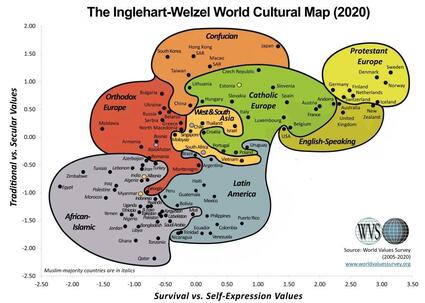 The World Values Survey is an international project that studies the cultural and value orientations of society. The study was initiated by the American sociologist Ronald Inglehart and has been conducted since 1981. From 1981 to 2021, 7 waves of research were conducted in more than 90 countries. The main goal of the project is to study changes in the people’s worldview, their value orientations and attitudes towards various aspects of life. For the survey, a standardized questionnaire is used, the questions of which cover a wide range of topics, including public administration, gender equality, religion, trust in various segments of population and public institutions, issues of personal safety, and so on.

The World Values Survey Association is a representative organization in the conduct of research and the analysis of results. The headquarter of the organization is located in Vienna (Austria). Since 2013, the President of the Association is Professor Dr Christian W Haerpfer, Head of the Secretariat - Dr. Kseniya Kizilova.

The research results of each wave are published on the official website of the World Values Survey Association (WVSA).

Since 2017, the 7th wave of research has started, in which, since 2018, Public Opinion Research Institute is a representative of Kazakhstan. At the moment, WVS-7 has already been held in 79 countries, the first combined database has been published on the WVSA website. It is planned that in the rest of the countries the 7th wave of research will be completed in December 2021.

Since 2018 Botagoz Rakisheva, Candidate of Sociological Sciences, Project Director of the Institute, is the Principal investigator of WVS-7 in Kazakhstan.

The results can be viewed on the official website of the World Values Research Association.