On November 1, 2018, the Regional Bureau for Central Asia of the Konrad Adenauer Foundation and the Museum of Remembrance of the Victims of Repression under the Cabinet of Ministers of the Republic of Uzbekistan held an international conference "Oral history in domestic and foreign practice: method, source, cultural and educational technologies" in Tashkent. At the conference, Botagoz Rakisheva made a presentation on the subject of "International studies using the "Oral History" methodology: the experience of Kazakhstan".

On October 30, 2018, the Central Asian Scientific and Expert Council on Interethnic Tolerance and Public Accord of the Assembly of the People of Kazakhstan on the theme "Kazakhstan and Central Asia: Ethnosocial Processes and Ethnocultural Dialogue" was held in Nur-Sultan. As part of this event, Botagoz Rakisheva presented the results of the international sociological study "Turkbarometer" of the International Turkic Academy.

On October 18-19, 2018, the Representative Office of the Friedrich Ebert Foundation in Kazakhstan organized the conference "REGIONALIZATION IN CENTRAL ASIA" in Nur-Sultan. Botagoz Rakisheva (Public Opinion Research Institute) made a report "General Values of the Youth of Central Asia: The Basis for Cooperation".

On September 27-28, 2018, the International Scientific and Practical Conference "On the role of self-government in strengthening the family and raising the younger generation" was held in Tashkent. Organizers and partners: Scientific and Practical Research Center "Oila" under the Cabinet of Ministers of the Republic of Uzbekistan, National Center for Human Rights of Uzbekistan, Republican Council for the Coordination of Activities of Citizens' Self-Government Bodies, Ministry of Preschool Education, Ministry of Public Education, Committee on Religious Affairs, Center for Islamic Civilization Uzbekistan, International Islamic Academy of Uzbekistan. At this conference, Botagoz Rakisheva made a presentation on "Family values of modern youth in Kazakhstan, Kyrgyzstan, Tajikistan and Uzbekistan (based on the results of an international comparative sociological study)".

On September 14, 2018, Representation of the Konrad Adenauer Foundation in Kazakhstan together with the Assembly of the People of Kazakhstan held a conference on the topic: "Integration policy in Germany and Kazakhstan. Comparative analysis". At this conference, Botagoz Rakisheva, Director of the Public Opinion Research Institute, Ph.D. in Sociology, made a presentation entitled "Kazakh Diaspora in Germany: Experience of Integration", based on the results of the Kazakh diaspora study in Western Europe launched by the speaker in 2005. 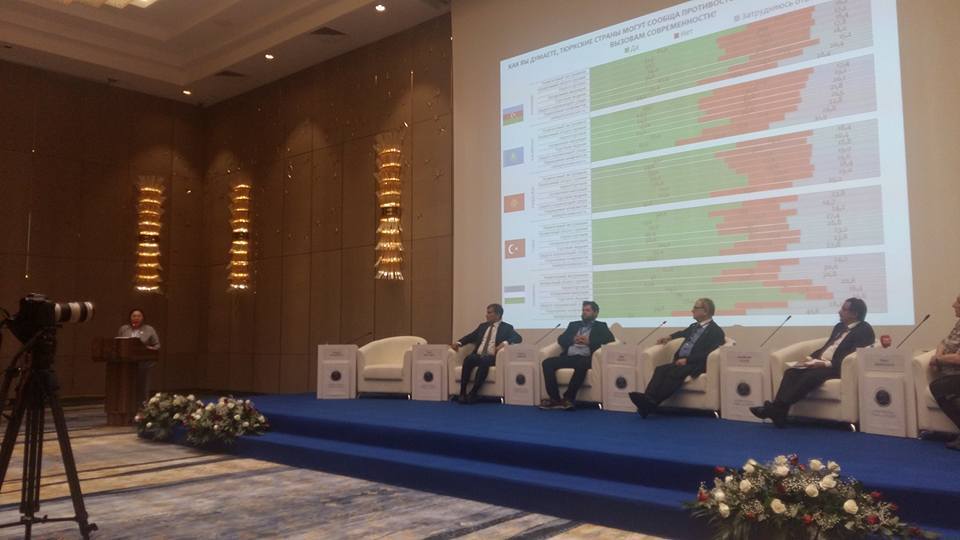 On June 18, 2018 - Botagoz Rakisheva, Ph.D. in Sociology, co-director of the Public Opinion Research Institute, made a presentation TURKBAROMETER - 2017: the main results of a cross-country sociological study (Azerbaijan, Kazakhstan, Kyrgyzstan, Turkmenistan, Turkey, Uzbekistan) at the III Forum of the Humanities "Great Steppe" of the International Turkic Academy. The report presents the main results of the international sociological study "Turkbarometer" of the International Turkic Academy, conducted jointly with the Public Opinion Research Institute (Astana, Kazakhstan). The main goal of the research project is to measure a number of indicators of humanitarian cooperation of Turkic-speaking countries. The first wave of the survey was conducted in September-November 2017 in six capitals of the Turkic-speaking countries: Baku, Astana, Bishkek, Ashgabat, Ankara, Tashkent. Respondents are residents of the state-forming Turkic ethnic groups from 18 years of age and older. In each country, 500 respondents were interviewed. The total sample was 3,000 respondents. The survey in the countries was conducted by professional sociological organizations.

The main conclusions of the project are that residents of the cities of the studied countries have a positive attitude to the idea of developing cooperation between the countries of the Turkic-speaking world. For many respondents, Turkic peoples evoke fraternal feelings, and joint projects have positive assessments. The population of the Turkic-speaking countries is well informed about each other and welcomes the economic, scientific, technical, sports and cultural cooperation between the countries.

On June 2-9, 2018, the research associates of the Institute Botagoz Rakisheva, Ainur Mazhitova, Gulden Ashkenova, Aizhan Nurgaliyeva visited Istanbul (Turkey), where they met with partners of the Institute, in particular with representatives of the Cozum Research Center, professor of sociology at Istanbul University, President of the Union sociologists of Turkic-speaking countries (2005-2014) Ticaret Korkut Tuna, Director of the French Institute of Anadolian Studies Prof. Bayram Balci.